Phillip E. Burnside is retiring following 13 years of service with Industrial Resources, Inc. Phil joined the company in June 2008 as Vice-President, and has served as President since June 2016. Phil holds a BS degree in Industrial Engineering from Fairmont State University and an MS degree in Safety Studies from West Virginia University. We wish Phil and his growing family God’s blessings in retirement. His work ethic, energy, integrity, intelligence, and dedication to our employees and customers are known by all who have worked with him.

Mark Carvillano has been named Industrial Resources’ new President, effective September 24th. Mark joined the company as a college intern in 1985 and has served in various roles of increasing responsibility during his long tenure at Industrial.  He earned a BS degree in Mechanical Engineering & Manufacturing/Industrial Engineering from Fairmont State University in 1989. 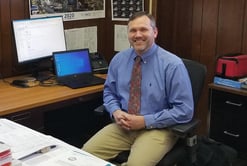 Also, Tom Hay has been promoted to Vice-President. Tom has over 27 years of relevant industry experience, holds a BS degree in Industrial and Operations Engineering from the University of Michigan and an MBA from Carnegie Mellon University. He works primarily from our Carnegie, PA office. These organizational changes will position Industrial Resources to accommodate current and anticipated growth as we continue to diversify our engineering, fabrication, and construction services throughout the US.